The rain in Spain ….

We first discovered Burgos, in Northern Spain, around six years ago.

When I say “discovered” I don’t mean it in a Columbus discovering the Americas way, it was more a case of inadvertently stumbling across it.

The circumstances were that we had booked flights in and out of Bilbao with the intention of spending a week touring the Northern coast of Spain. In the days before we landed the weather outlook was looking less than optimistic and the chances of catching some sun during our stay appeared to be non-existent. A week of wall to wall rain seemed to be all we had to look forward to meteorologically.

Following touchdown, the short walk from plane to terminal confirmed the accuracy of this forecast so an alternative plan was needed if we wanted to keep dry. The decision to 86 the coastal drift & head South was therefore an easy one under the circumstances.

After a quick look at the map we concluded that if we headed for Madrid we were guaranteed the sort of sunshine more usually associated with Spain. We love Madrid so this was no great hardship and the drive down would expose us to a part of Spain we usually only fly over. We thought we could maybe visit Segovia & Toledo too while we were down there as they had been on our to-do list for some time.  Decision made we picked up the hire car and were all set to go.

The road to Burgos

Bilbao to Madrid is about a 250 mile drive. It was now mid morning so we figured it would be an easy day’s drive with a stop off for lunch on route. Burgos suggested itself as the perfect place to break the journey as it was about 100 miles from the airport. Back then I was still hanging on to the belief that SatNav was for fools who were incapable of reading proper maps – so I had packed a Spanish road atlas. I quickly planned a route & gave it to the redhead so we could spend the next few hours deciphering road numbers & arguing about missed junctions in the customary manner.

In the main it was motorways & dual carriageways, but I’d also noticed an intriguing looking B-road that climbed over the top of the mountain range that the more obvious routes went around. It looked like it might have been a refugee from the pages featuring the Pyrenees! A slight detour to take it in wouldn’t hurt. And so an hour later, after a couple of deja-vu inducing laps of the motorways surrounding Bilbao’s airport, we were on the B2625 & heading for the hills.

To this day I don’t know the name of the mountain range.  Or the height they reach – which is probably not that high in reality. But these details don’t really matter. I do know they sit right on the border of the Basque country & Castilla y Leon as the signs inform you of this fact as you pass from one to the other at the summit. 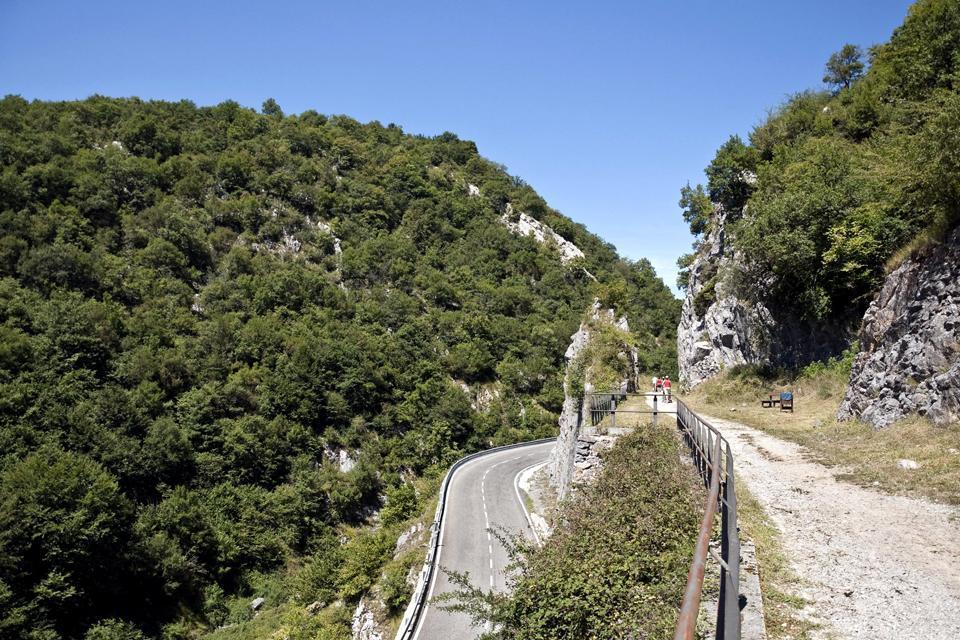 What is important is the switchback ride of a dozen or so hairpins to reach the viewing point at the top, and the exhilarating panoramic vista back across the plain below once you get there. On a clear sunny day, such as the one when we first encountered it, that view is hard to walk away from & impossible to forget.

Every holiday has a tipping point where the hassles & minor stresses associated with getting away have all been endured & you can begin to relax. It’s that “moment” you focus on in the weeks before the trip. It’s the “moment” that epitomises your holiday & becomes symbolic. For another destination, that “moment” might be represented by your first cold beer or cocktail in the hotel bar, or by diving into the pool for the first time, or the first mouthful of a familiar local delicacy. For us, for the last six years, every visit to any part of Northern Spain involves stopping on top of this mountain and gazing at the view. This is our “moment”.

For the detail freaks out there, you can check it out for yourself if you type “Mirador Puerto de Orduna” into Google maps. It’s far, far more impressive in reality but the photos give you a good idea of this special place.

My kind of town

As for Burgos itself, I’d have to say that our expectations weren’t particularly high prior to that first visit. A convenient journey-break & a place to get some lunch was all we asked of it. We knew it was famous for its black pudding – in the way Melton Mowbray is for its pork pies – but beyond that we had no idea. We certainly weren’t expecting a beautifully kept medieval city centre dominated by a magnificent cathedral.

Coming from York, with the world-famous Minster just around the corner from one of our restaurants, it’s probably fair to say that we are a little blase about large ecclesiastical buildings. However, the sight of the Catedral de Santa María de Burgos stopped us in our tracks from half a mile away. The Spanish are renowned for giving good church – maybe not having Henry Vlll in their ancestry helps in this respect – but it’s no exaggeration to say that if there were such a thing as Cathedral Top Trumps, having the Burgos card in your hand would pretty much guarantee you a win every time.

Our positive first impressions of Burgos were further reinforced when we went in search of lunch. The city centre had more than its fair share of streets & squares lined with bars, restaurants & cafes. Why had we not heard more about this place before? It was becoming a bit of a mystery.

The choice of venues was extensive, but we soon ventured into one particularly attractive looking establishment & were quickly furnished with menus & a wine list. A bottle of Tomas Postigo’s excellent Ribera del Duero was spotted on the wine list & duly ordered as a reminder of our visit to his winery the previous year. This was accompanied by pulpo, Padron peppers, tortilla, a plate of Jamon Iberico ham and some croquettas – the perfect lunch!

It was around this point that we realised that there was no way we were going any further that day. We had left the car in one of those underground city centre car parks that the Europeans do so well – spotlessly clean with floors that make your tyres squeal even before you start to move. All we needed to do was find a hotel for the night & then we would be free to explore more of what Burgos had to offer. Madrid could wait!

I believe that one of the biggest benefits that the digital age has given the traveller without schedule or agenda is the ability to find a hotel on the fly. No more schlepping around numerous establishments trying to find a decent room for a reasonable rate like we did in the old days. Now, we take it for granted that we can just log on & book in – and that is exactly what we did – to the Hotel Abba Burgos.

Our fears of a 70s Scandi-pop themed hotel were quickly dismissed when we checked in a little while later. The hotel, just beneath the castle on top of a hill and overlooking the city, occupied one half of an enormous, classically styled building which was once home to the Major Seminary of Burgos – a place where priests go to train. The fact that this apparently ancient building was only finished in 1961 & inaugurated by Franco made it even more fascinating. The overall scale & style of the building wouldn’t look out of place on the strip in Vegas, and what’s weirder still, the half that isn’t a 4 star hotel is in a state of repair that can only be described as dilapidated. There are no windows, no interior walls and the grounds are overgrown. It remains so to this day – we know this as we have stayed there on several occasions since. Consider it recommended!

Accommodation sorted, we were soon walking back down the hill into the city – a route that once again took us right past that impressive cathedral. Burgos, we discovered, is on the El Camino de Santiago route, so it is inevitable that pilgrims make up a large proportion of visitors to the city – using it as another overnight stop on their long journey to the West. This may explain why the place feels comparatively quiet & provincial during the day but comes alive in the evening when that day’s newly arrived pilgrims are out on the town taking in the sites & fuelling up for their next day’s walk.

Since our first visit we have noticed that Burgos has become noticeably busier. Each subsequent trip we have made has offered a larger selection of bars, restaurants & hotels all catering for this growing demand. Perhaps this is due to the increasing popularity of the Camino, but I suspect it is also because the city is becoming recognised as an interesting destination in its own right. It is well positioned to explore the wine regions of Northern Spain and is the perfect place to experience some provincial Spanish culture. One such example of this is “El Colacho” – the annual baby-jumping festival in the nearby village of Castrillo de Murcia.

Additionally, Burgos was awarded “Spanish Gastronomy Capital” in 2013 & 2015, which may go some way to explaining why we have always found the food to be so good.

Perhaps if Burgos’ small airport was favoured with some international flights it might become a little more popular with mainstream tourists from the UK? But then again, that would inevitably mean missing out on the delights of the B2625, and you would have to be crazy to leave that out of your trip!